Our twins are currently obsessed with carrying things.

By “obsessed”, I mean they never aren’t holding something. And by “things”, I mean an inappropriate amount of whatever they can get their hands on.

At first, we thought it was really cute. Watching tiny humans attempt to carry four dolls or four hundred Legos from room to room would make even the Grinch crack a smile. But after the third tumble down the stairs or the twenty-fifth refusal to leave the house without the entire dinosaur collection, it starts to get old.

I’ve been on a conscious parenting kick the past few months, so instead of getting angry I decided to try and understand why the hell they’ve become professional hand hoarders.

And thank god I did, because the research is really interesting.

It turns out that this stage of development is often referred to as “The Load and Tote Phase”. It’s not just normal, it’s basically mandatory.

Infants average 24 bouts of spontaneous carrying per hour. To put that number into perspective, a 13-month-old generates 156 bouts of walking and 41 bouts of object play per hour. That means they’re carrying objects around while walking 15% of the time.

This activity, though seemingly pointless, is actually helping your child gain body awareness. Holding or dragging things around, often referred to as “heavy work”, sends messages through the nervous system that helps the brain learn where their body is in their physical space. This actually calms your toddler down because their sensory system is craving a deep understanding of how to navigate the world around them.

Your child may also start carrying certain items only, like a blanket or a doll. This is normal, too. This stage of life is filled with changes, especially as your child drops a feed, enters childcare, or moves up to a big-kid bed. Fixating on one or two items gives your child much needed comfort, allowing them to feel a sense of control in an ever-changing world.

You may also notice that they seem to pick items up and carry them back and forth on a similar path. This exploratory behaviour is known as a schema. Anytime your child is repeating an action, they are developing a stronger understanding of the world and how they function in it. This deeply aligns with their desire to create and adhere to routines.

One of the most interesting things I learned was that your child will actually fall twice as much with no objects in their hands. Some researchers believe this is because they are learning to be more careful, but others believe they gain confidence while holding things.

Didn’t know why your child carries so many things around the house? Well, now you know!

Speaking of knowing… if you’re keen to understand what the heck is going on with your toddler, check out The Mind of a Toddler page for interesting answers to your burning questions!

Until next time, stay crafty!

Credit: These photos were taken by Ramone Minchero.

2 comments on “Why do toddlers carry things around?” 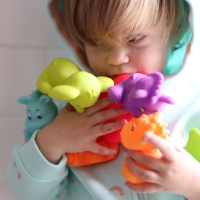