It takes a special someone to actually enjoy a baby shower.

First, you have to pretend to enjoy eating tiny things. Not tiny portions. Tiny things. Little pink cupcakes. Baby croissants. Petit fours the size of a mosquito. Desserts designed to make you feel obese for needing to eat eleven of them. Or maybe twelve.

Then there’s the whole gift opening experience. You have to literally watch two people sit in one spot and open 50 to 100 gifts. It’s like a birthday party at which you’re expected to pretend to be excited about the host’s 22nd pale blue onesie.

And don’t get me started on the games. The games! “Guess the due date!” “Put a diaper on a doll blindfolded!” It’s as if pregnant women all receive the same list of ancient baby shower activities that were etched onto a tablet by Moses. Where’s the freshness? Where’s the creativity?

Well, that’s where I come in.

Back in July, my family (mainly my mother) threw us a baby shower at their home in Epsom, New Hampshire.

My mom, the craft goddess herself, engaged in a multi-month text brainstorm that produced some unique approaches to typically cookie-cutter parties. And while she owned the food and decorations (more to come in future blog posts), I was in charge of the invitation, the party favors, and, yes, the games.

Because let’s be honest. Much as I mock idiots who love baby showers… I, as you may have guessed, am one of them.

Like a toddler in a candy store, I plunged down the visual rabbit hole that is Pinterest. One of the things that jumped out to me was how generic most baby showers are. There’s so little personalization. The guiding principal when designing our wedding was to make sure people walked away feeling like they understood our relationship a bit more. And if our wedding was an opportunity to educate people to who we were as a couple, I wanted our shower to be a way to playfully introduce aspects of who we’d be as parents.

The first game I came up with was a questionnaire. My husband and I sat down one night and began discussing things that made us unique, things that would likely influence who our children would become. What were our favorite foods, or movies, or childhood friends? The list became the foundation of the “Dad or Pops?” game in which guests were quizzed on which parent was which. The guest who got the most questions right would win a prize.

To make it challenging, we included a “BOTH” category. For example, my husband travels so frequently that finding a country I’ve visited that he hasn’t would surely throw guests off. The option of “BOTH” raised the stakes. As we moved through each question with the guests, the entire party was divided for nearly every question. A sign that we had achieved our desired outcome of creating a challenging game for adults that welcomed them into our lives a bit more.

The winner, my very best friend Sarah, walked away with a gift card to that fancy New England family favorite, Dunkin’ Donuts, and a bottle of rosé. Because if you’re not rewarding your guests with alcohol, then you’re doing your baby shower wrong.

For the next game, I knew I wanted to play with baby photos. I’d seen clever Pinterest crafters use baby photos of the parents-to-be as decorations, so I asked guests to submit their own baby photos with their RSVPs. What was I going to do with them? Who knew. But at least I’d have some inspiration. And enough time to figure something out!

I decided on a two-pronged approach to using the pictures. First, I’d hang them on a clothing line for everyone to peruse as they entered. And then I’d used some of the more unique shots in a game I called “You Have The Cutest Baby Face!”

In Photoshop, I plotted 15 baby faces next to list of guest names. Match the photo with the name and you win.

This game was, well, less of a success. Somehow, nearly every single guest guessed every single face correctly. As a tie-breaker, we gave the second prizes to the second-place winner of the first game.

If you’re planning on trying this game for your baby shower, I’d suggest leaving the names off the game entirely. Having the guests write them in will make the game much more challenging (especially if you screw with them by picking guests most people won’t know.)

If you’re a fan of either one of these games, feel free to connect with me directly and I’ll email you the working file!

Until next time, stay crafty. 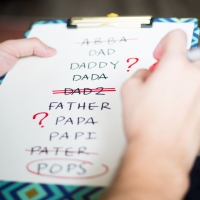